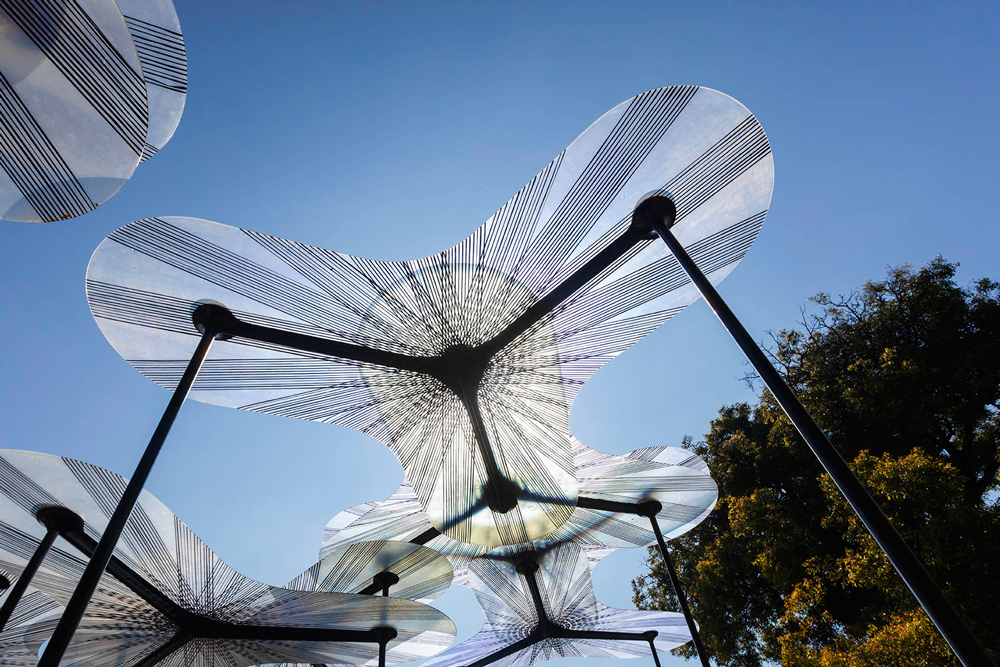 MPavilion 2015 has a new address! A gift to the City of Melbourne, AL_A’s high-tech canopy of composite petals and carbon fibre stems will be relocating to the corner of Collins Street and Harbour Esplanade in Docklands.

Making the announcement today, Naomi Milgrom AO, Chair of the Naomi Milgrom Foundation, said: “In its new permanent home, Amanda Levete’s MPavilion 2015 will continue to inspire and be part of our city’s cultural heritage as a public amenity of Melbourne. Amanda’s magical, forest-like structure joins a growing family of architectural masterpieces to be enjoyed by the people of Melbourne for years to come.”

AL_A’s design is the second annual temporary pavilion in a series of four to be commissioned by the Naomi Milgrom Foundation as part of the MPavilion project. It’s not every day you hear of an entire building being moved, but each MPavilion shifts to a permanent Melbourne location after its season in the Queen Victoria Gardens.

Lord Mayor Robert Doyle said MPavilion 2015 would provide a lasting cultural legacy to Melbourne: “The City of Melbourne is thrilled to be working with the Naomi Milgrom Foundation and Places Victoria to provide a permanent home for MPavilion 2015 in Docklands. MPavilion is a unique architectural feature that will provide a wonderful a drawcard for the Docklands community, both as an event space, a meeting hub and a symbol of the value of public art and urban design.”

The State Government’s property developer Places Victoria will start work installing MPavilion 2015 at the west end of Collins Street this week. Places Victoria precincts general manager Simon Wilson says the pavilion will be incorporated into new landscaping in existing open space between Collins Street and the multipurpose sports courts on Harbour Esplanade. “We’re very grateful to the Naomi Milgrom Foundation and the City of Melbourne for gifting this beautiful pavilion to Docklands so it can continue to be admired and enjoyed,” he said. “It will be a new architectural feature for the precinct, a welcome lunch spot for around 15,000 workers in the vicinity and a place to take shelter.”

Created by British architect Amanda Levete in collaboration with Brisbane-based marine industry specialists mouldCAM, the composite ‘petals’ comprising the roof of MPavilion 2015 are each only three millimetres thick, and wired into high-tech carbon-fibre stems. Moving MPavilion 2015’s forest-like canopy will be a literal process of uprooting. The relocation and landscaping works in Collins Street will continue until mid-2016.