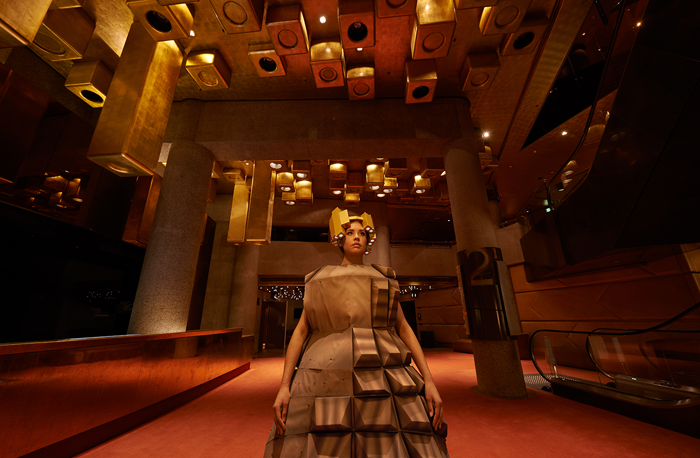 We’re excited to announce the teams working on this year’s ‘Wearing the city’ designs, to be unveiled by Monash University Art, Design and Architecture (MADA) at MPavilion on 14 November!

The idea behind ‘Wearing the city’ is to create unique wearable forms inspired by iconic buildings. The project draws on a fabled history of architectural dress-ups. At New York’s Beaux-Arts Ball of 1931, at least two dozen architects came dressed as buildings they had designed—including Ralph Walker as the Wall Street Building, and William Van Alen as the Chrysler Building, and Leonard Schultze as the Waldorf-Astoria.

MADA’s take on this tradition is to team students with leading Melbourne architecture practices to translate iconic local buildings into parade-able outfits.

This year, the teams are being guided by MADA lecturers Miriam Borcherdt and Cate Hall.

“The students have developed interesting responses to the interiors with their proposed designs,” explains Borcherdt. “The project engages with architectural form at the scale of the body and provides interdisciplinary challenges. It is also an exciting opportunity for the students to be involved in such a public event.”

Naomi Milgrom AO, of the Naomi Milgrom Foundation, is delighted that MPavilion will once again be hosting ‘Wearing the city’, as part of its 2015–16 program: “The event is a fantastic showcase for celebrating the imaginative design minds of Melbourne’s next generation of architects and designers.”

Without further ado, please meet the 2015 teams below. And we hope you can join us at MPavilion on Saturday 14 November from 5pm to 7pm to see their designs and hear from the judges.